Should Kids Floss or Brush First? 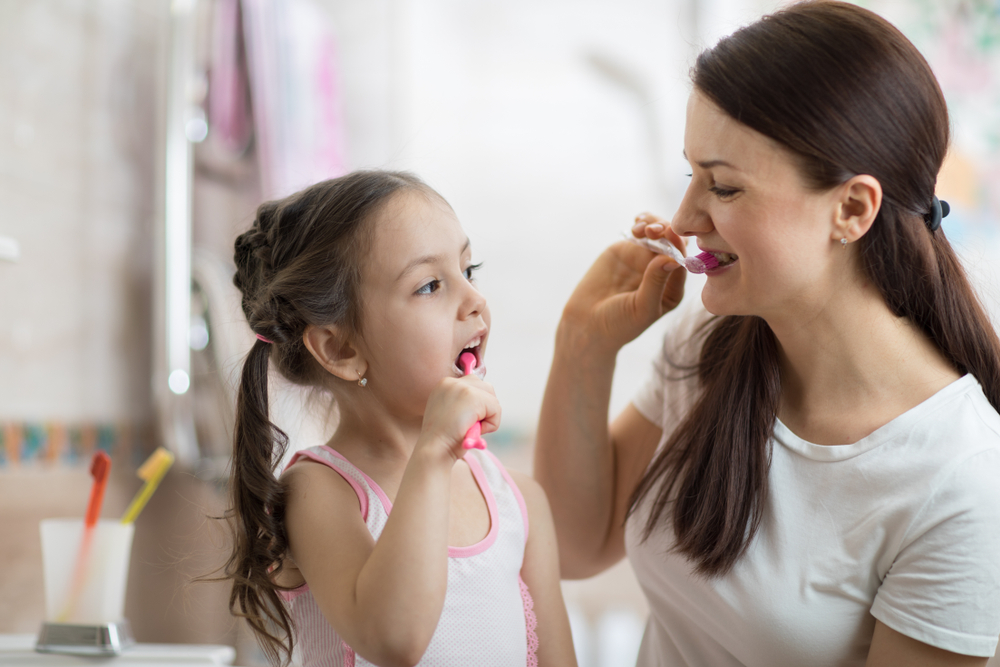 As a parent, you probably know one of the keys to helping your little one maintain a superhero smile is developing an amazing oral hygiene routine. After all, brushing and flossing will go a long way in preventing tooth decay and gum disease in children and keeping their smiles strong and sparkling clean. You probably also know kids should brush their teeth twice a day and floss once daily. But, what about the brush floss order? Should kids floss or brush first? And, when should they floss? In the morning? Before bed? For older kids, where does mouthwash come in?

Well, wonder no more, because our Englewood, Thornton and Central Park pediatric dentists have you covered. In this post, we’ll talk about:

Should Kids Floss Before or After Brushing?

The order of brushing and flossing might not seem all that important. Either way, you’re getting rid of those sugar bugs on your child’s teeth, right? Well, a 2018 study in the Journal of Periodontology aimed to answer the question of whether to floss or brush first and to determine how much of a difference the brush floss order had on plaque removal.

The researchers discovered that flossing before brushing eliminated a whole lot more plaque (the sticky bacterial film that clings to the pearly whites) than flossing after brushing. The theory is that flossing loosens the bacteria, plaque and food debris stuck between the teeth and then brushing, followed by rinsing the mouth, further clears out the bad stuff. So, whenever possible, have kids floss teeth before they brush.

Is it Better to Floss in the Morning or at Night?

Flossing the teeth is super important for removing plaque between the teeth and along the gumline that can’t be reached with a toothbrush to maintain kids’ oral health. If kids don’t floss, they’re at a greater risk for tooth decay and gingivitis. How often should you floss your teeth? Once a day is recommended for children (and adults!).

As for the best time to floss, it really doesn’t matter. While, theoretically, flossing teeth at night can be a good way to get rid of any food, plaque and bacteria that has built up throughout the day, how often kids floss is more important than when they floss. So, if you’re exhausted at night and can’t keep up with your child’s flossing routine, floss in the morning. If mornings are hectic, floss at night. As long as the job gets done, Dr. Paddy, Dr. Roger and Dr. Meredith whole-heartedly support flossing any time of day!

What is the Ideal Brush, Floss, Mouthwash Order?

According to the American Dental Association’s guidelines, little ones under the age of six should not use mouthwash unless directed to by their dentist because there is a high risk of them accidentally swallowing it. However, if your child is six or older and is good at spitting out toothpaste, adding mouthwash to their oral hygiene routine can ensure no plaque is left behind. As for the recommended brush, floss, mouthwash order, have kids floss first to loosen plaque and food particles, then brush their teeth and finish by swishing the mouthwash around in their mouth for 60 seconds and spitting it out. If you do opt for mouthwash for kids, choose an alcohol-free version.

The Basic of Flossing and Brushing Teeth for Kids

While we’re on the topic of flossing and brushing kids’ teeth, we thought we’d have a quick refresher on some of the basics.

Here are a few tips for flossing and brushing success:

Now that you know the basics of brushing and flossing kids’ teeth, including the order in which to do it, does the toothbrush matter? Yes, the type of toothbrush does matter. For kids, we usually recommend a child-sized, soft-bristled toothbrush. Hard bristles will irritate their gums, which is a surefire way to make them dislike brushing. However, whether you choose a manual toothbrush or an electric toothbrush that’s made for kids, is a personal preference.

The bottom line is that studies do suggest the brush, floss, mouthwash order matters to some extent and having kids’ floss before they brush and then use mouthwash last can help send extra plaque packing. That being said, if kids are brushing their teeth twice a day and flossing once daily, it will ward off cavities and keep their teeth and gums healthy, regardless of the order.

Do you need help creating an outstanding homecare routine for your kiddo or are you in need of a fun, exciting dentist for kids in Denver, Englewood or Thornton, Colorado? Schedule a visit at Kids Mile High Pediatric Dentistry today! Dr. Paddy, Dr. Roger, Dr. Meredith and Dr. Scheer are on a mission to give your child the absolute best dental and orthodontic care using the most up-to-date techniques and modern equipment. Read more