Most of us think of gum disease as an adult problem that only affects us later in life. Of course, as pediatric dentists in Central Park, Englewood and Thornton, we know that gum disease (and especially its precursor gingivitis) are extremely common in children and teens. Gingivitis and gum disease cause puffy, swollen or red gums that bleed when brushing or flossing. Caused by a build-up of food particles, bacteria and plaque, gum disease in kids and teens can lead to significant tooth damage and health concerns if left untreated.

Though signs of gum disease are typically first seen in adolescence, the beginning stages can begin at any point in childhood. That’s why it’s so important for kids to learn healthy oral hygiene habits from an early age. At Kids Mile High, it’s our job to help set your child up for lifelong tooth health. Here, we’re answering all your questions about kids and gum disease, including:

What is Childhood Gum Disease?

Chronic gingivitis is the first stage of gum disease and is not only very treatable, it’s preventable with proper brushing and flossing and regular dental care. Gingivitis itself is a non-destructive form of periodontal disease but untreated, it can lead to more serious, damaging periodontitis.

Localized aggressive periodontitis primarily affects the first molars and incisors in teens and young adults. Oddly, patients with this type of periodontal disease don’t usually have much plaque, but experience severe loss of the alveolar bone. That’s the part of the jaw that holds the roots of your teeth and keeps them in place, so it’s pretty important!

Lastly, with generalized aggressive periodontitis, your child will have very inflamed gums and heavy build-up of plaque and tartar. Over time, this condition can weaken the teeth and cause them to become loose, leading to tooth loss.

Gum Disease in Kids: What to Look Out For

Do you think your child might have gingivitis or gum disease? There’s no reason to panic. It’s a common part of childhood and adolescence and if you catch it early, it will not cause lasting damage. If you suspect your child is suffering from periodontal disease in any form, it’s always best to visit your pediatric dentist. In the meantime, keep an eye out for the main symptoms of gum disease in kids:

However, your child’s symptoms alone are not always enough to diagnose childhood gingivitis. A baby with sore gums most likely has a tooth erupting, not gum disease. Loose teeth are also not a cause for concern on their own because all kids lose their baby teeth to make space for their adult ones. But if, for example, your two year old has swollen gums and bad breath that doesn’t seem to go away, it may be an early sign of childhood gum disease.

Why Does My Child Have Gum Disease?

If your child does in fact have gum disease, you’re probably wondering what caused it in the first place. As we’ve mentioned, gingivitis and periodontal disease are characterized by excess plaque, bacteria and tartar that accumulate on the teeth over time. In most cases, the condition is caused by poor oral hygiene, such as not brushing or flossing your teeth, which allows all that gunk to build up. But even with proper dental habits, kids can still develop gingivitis. There are several additional causes of gum disease in children and teens, and risk factors that may make them more likely to develop the condition.

Puberty (and all the wonderful hormonal changes that come along with it) can contribute to the development of gum disease in teens. According to the American Academy of Periodontology, heightened progesterone and possibly estrogen during puberty raise blood circulation to the gums. This in turn increases the gum’s sensitivity to any irritation, including food and plaque, causing sore, swollen and red gums. These symptoms will go away as puberty progresses, but teens need to be extra diligent about brushing and flossing their teeth during this time to avoid further gum disease in the future.

Gum disease, as with all health concerns, is best treated early. If possible, it’s better to prevent it before it even starts! This is absolutely possible with proper oral health care, including brushing your teeth twice a day, flossing once per day, and maintaining regular visits with your dentist. All of the above applies to treating gum disease in children, teens and adults.

So teach your child how to brush and floss from an early age, be a good role model by demonstrating positive oral health behavior, and always stay up to date on your child’s dentist appointments. Is your child due for a visit with the doctors at Kids Mile High? Contact us today to book. 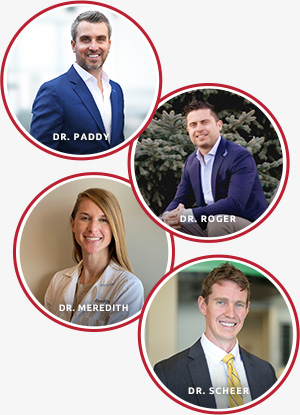 Dr. Paddy, Dr. Roger, Dr. Meredith and Dr. Scheer are on a mission to give your child the absolute best dental and orthodontic care using the most up-to-date techniques and modern equipment. Read more

This site uses Akismet to reduce spam. Learn how your comment data is processed.